AS HE walked into the maternity ward of Lok Nayak Jayaprakash Narayan Hospital in Delhi on his first day at work in 1978, Puneet Bedi, a medical student, saw a cat bound past him “with a bloody blob dangling from its mouth.” “What was that thing—wet with blood, mangled, about the size of Bedi’s fist?” he remembers thinking. “Before long it struck him. Near the bed, in a tray normally reserved for disposing of used instruments, lay a fetus of five or six months, soaking in a pool of blood…He told a nurse, then a doctor, I saw a cat eat a fetus. Nobody on duty seemed concerned, however.” Mara Hvistendahl, a writer at Science magazine, is profoundly concerned, both about the fact that abortion was treated so casually, and the reason. “Why had the fetus not been disposed of more carefully? A nurse’s explanation came out cold. “Because it was a girl.”

Sex-selective abortion is one of the largest, least noticed disasters in the world. Though concentrated in China and India, it is practised in rich and poor countries and in Buddhist, Hindu, Christian and Muslim societies alike. Because of males’ greater vulnerability to childhood disease, nature ensures that 105 boys are born for every 100 girls, so the sexes will be equal at marriageable age. Yet China’s sex ratio is 120 boys per 100 girls; India’s is 109 to 100.

The usual view of why this should be stresses traditional “son preference” in South and East Asia. Families wanted a son to bear the family name, to inherit property and to carry out funerary duties. Ms Hvistendahl has little truck with this account, which fails to explain why some of the richest, most outward-looking parts of India and China have the most skewed sex ratios. According to her account, sex-selection technologies were invented in the West, adopted there as a population-control measure and exported to East Asia by Western aid donors and American military officials.

The ultrasound and other technologies that identify the sex of a fetus started out as diagnostic devices to help people with sex-linked diseases, such as haemophilia, conceive healthy children. They were greeted rapturously in America in the 1960s. “Ultrasound Device Takes Guessing Out of Pregnancy” ran one headline. “Control of Life: Audacious Experiments Promise Decades of Added Life” ran another.

But 1960s America was also a period of growing concern (hysteria, even) about population in developing countries. Policymakers, demographers and military men all thought rapid population growth was the biggest single threat to mankind and that drastic measures would be needed to rein it in. One such figure was Paul Ehrlich, whose book, “The Population Bomb”, became a bestseller in 1968. Mr Ehrlich pointed out that some Indian and Chinese parents would go on having daughter after daughter until the longed-for son arrived. If, he argued, they could be guaranteed a son right away, those preliminary daughters would not be born, and population growth would be lower. Sex selection became a tool in a wider battle to stop “overpopulation”.

But how did an obsession of Western policymakers turn into the widespread practice of destroying female fetuses in Asia? Partly, argues Ms Hvistendahl, through aid. The Ford and Rockefeller Foundations gave over $3m to the All-India Institute of Medical Sciences (AIIMS) in the 1960s, helping it to pioneer India’s first amniocentesis tests, initially for genetic abnormalities and later for identifying fetal sex. India at that time was the World Bank’s biggest client, and the bank made loans for health projects conditional on population control.

The other day, I glanced over this review of the book “Unnatural Selection: Choosing Boys Over Girls, and the Consequences of a World Full of Men”. The review itself raises some chilling statistics (2.75 abortions in Seoul per live birth in 1977, conditional loans from WB to India on population control measures – out of which ultrasound became a big tool, etc.) and the book seems at least worth reading to give another perspective to the traditional view that the problematic gender balance in India is caused by cultural / religious factors alone. 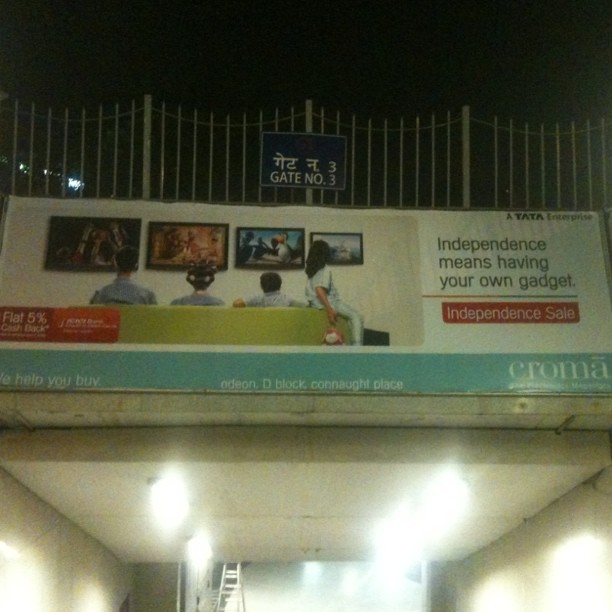 For those who haven’t read – India is currently all ablaze with discussions around the anti-corruption campaigner Anna Hazare and his (Swedes – make no mistake this Anna is an 80 year old guy) engagement of large amounts of the Indian middle class around a proposal for new anti-corruption measures. The goal is good, but the proposals seek to weaken many democratic institutions in the process of trying to stamp out corruption (including power of judiciary) making them somewhat problematic. I won’t give a summary of it all – but for your “allmänbildning” (“general knowledge” in Swedish) this is, for better or worse, probably one movement that will be added into the history books (and probably somewhat ignored in western news and history classes leaving you and your offspring potentially horribly ignorant unless you follow my advice and read up on your own).

While getting my phone fixed today, I passed through crowds of middle class peeps with flags, Anna-caps and face paintings. As I entered the phone fixers office, I met a couple who were out to buy an iPad. Being buyers of such an expensive product (representing the annual salary of your average domestic worker) they are naturally upper middle class. Probably tired of the bribes that pervade any official dealings in India, they were probably supporters of the Anna Hazare movement (disclaimer: I didn’t ask them). However, what they didn’t seem to realize was that the question they were being asked by the vendor as I entered the shop was inexorably linked to the issue of corruption – “with or without bill?”

See, in India, almost anything that you buy can be got with or without bill. With bill (at least ostensibly) means that such things as service tax (10.6%) have been levied. With bill thus means that the price of whatever you buy will be considerably higher. When the choice arises of whether you want to pay 30000 or 35000 rupees for your iPad (for which warranty is given by Apple regardless) official corruption might not be the thing that is on the top of your mind and that piece of stamped bill paper might not seem so relevant. But in fact, in the end, if these middle class consumers truly care about corruption, they also need to ensure that they pay taxes. It won’t solve corruption, and the Indian government are currently doing fairly well with revenues, but it is a crucial step and an important behavioral change in order to bring money into official systems. 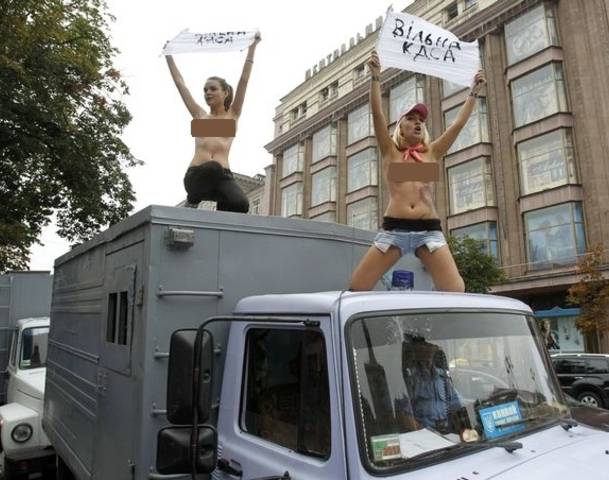 Activists from the women’s rights organization “Femen” protest, while standing on the roof of a police wagon for transportation of detainees, near the Pecherskiy District Court in Kiev.Picture: GLEB GARANICH / REUTERS

For the first time since the most prominent Ukrainian women politician Yulia TymoshenkoYulia Tymoshenko faced charges of fraud and corruption, the country’s most controversial feminist group Femen stood by her side, and staged one more topless protest in Kiev.

This time, Femen activists climbed on top of a prison wagon outside the court where Tymoshenko trial was going on, removed their blouses, and denounced against Ukraine’s police and politicians, saying they were the ones who belong in custody.

Maybe I’m slow, but it doesn’t seem to jive well that they’re using their breasts to gain attention.

“Mostly, the best way to be the next Mark Zuckerberg is to make difficult choices” 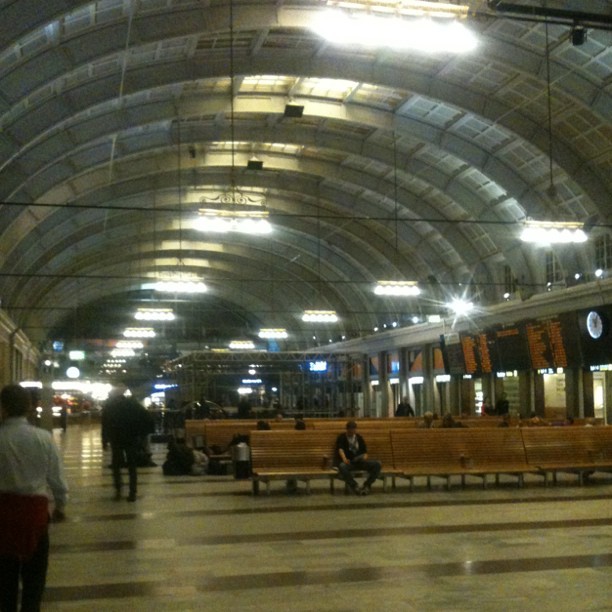 "'No, sir', answered Mr Burnham coolly. 'Because it is not my hand that passes sentence upon those who choose the indulgence of opium. It is the work of another, invisible, omnipotent: it is the hand of freedom, of the market, of the spirit of liberty itself, which is none other than the breath of God'"

NEW DELHI: The city government has set in motion the process to remove 33 slums from different parts of the city — bulldozers will start rolling into the slums from October. Clearing the air on the status of residents of these slums, urban development minister Raj Kumar Chauhan made the stand clear after a review — led by chief minister Sheila Dikshit — that the 6,738 people found eligible out 10,017 applicants will be relocated to flats developed for the economically weaker sections in areas like Bawana and Narela.

The other slum dwellers, consisting of nearly 58%, will either have to present documents to make the cut or fend for themselves. Incidentally, the decision on removal of slums and the attempt to yet again expedite the much delayed allotment process for the 9,600 odd flats in areas like Narela and Bawana comes two days after the Lokayukta, Justice Manmohan Sarin, indicted the chief minister for misrepresenting facts while announcing that 60,000 flats were ready for EWS category under the Rajiv Ratna Awaas Yojana in the run–up to the 2008 assembly polls in Delhi.

Slum “rehabilitation” is moving forward in Delhi. 58% of the residents of the currently demolished slum will have no real option for where to live, meaning that they’ll simply resettle in another, probably even poorer slum. How could that sort of intervention even remotely be labeled a “solution”?

Read the full article at http://timesofindia.indiatimes.com/city/delhi/Bulldozers-set-to-raze-33-slums… .