Matchmakers: In Irish they are Babhdóir, in Yiddish they are Sadchen. For fruit flies, the matchmakers might be gut bugs.

Fruit flies (Drosophila melanogaster) with the same set of intestinal bacteria preferred mating with each other, discovered professors Eugene Rosenberg, Daniel Segel, and doctoral student Gil Sharon at Tel Aviv University in Israel. They published their results in the Proceedings of the National Academy of Science. 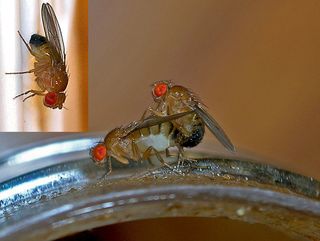 When the flies’ intestinal bacteria were killed off with antibiotics, the flies mated randomly. When the bacteria were added back into their guts, they went back to mating preferentially.

Mating choice and reproductive separation are believed to drive evolution. And the researchers believe this study suggests evolution can be driven by a community of organisms living symbiotically, not just the individual organism. The symbiotic community of organisms, called a holobiont, evolves together. In this case, the fly’s intestinal bacteria influenced mate choice.

In the experiment, the researchers mixed two different foods into the agar medium on which the fruit flies were raised. One lived on a standard cornmeal-molasses-yeast mixture. The other was raised on starch.

Humans make it so complicated sometimes… why not just trust your stomache bacteria?