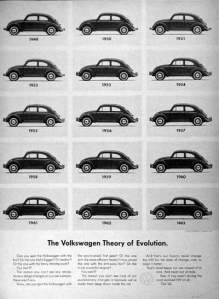 In 1956, Lloyd Stoffer famously stated “The future of plastics in the trash can.”

At the time, this was considered a very controversial statement, and he got in some trouble for it. Stoffers sentiment comes during a period where industry was facing a unique problem. The Volkswagen theory of evolution left was to build something to last, without versions, fashions, and make it easy to fix. So when someone bought it, that was it. They only needed one. With this mode of production, markets were saturating. The opportunities for growth and profit were diminishing and reaching stability.

Companies and industries that wanted to grow, that were premised on growth and profit started to intervene at a material level and developed disposability—planned obsolescence and fashion supported by a regime of advertising. They designed a throw away society. People bucked against this design. They had just come out of the Depression in the United States, and an ethos of saving, fixing, and stewardship was the norm. Industry was designing a shift in values.In his 1960 book The Wastemakers, Vance Packard writes against this sort of strategy for profit.He images a city called Cornucopia City, “located on the edge of a cliff, and the ends of [the] assembly lines can be swung to the front or rear doors depending upon the public demand for the product being produced. When demand is slack, the end of the assembly line will be swung to the rear door and the output of refrigerators or other products will drop out of sight and go directly to their graveyard without first overwhelming the consumer market” Packard 1960: 4.

Even earlier, Susan Strausser recounts riots by soldiers in train stations in the 1917 when the communal tin cup for water was replaced with disposable paper cups Strasser 1999: 177. Such waste was seen as abhorrent.Seven years after Lloyd Stoffer’s controversial statement, he addresses plastics industry representatives at a conference in New York City:  “It is a measure of your progress in packaging in the last seven years that this remark will no longer raise any eye-brows. You are filling the trash cans, the rubbish dumps and the incinerators with literally billions of plastics bottles, plastics jugs, plastics tubes, blisters and skin packs, plastics bags and films and sheet packages–and now, even plastics cans. The happy day has arrived when nobody any longer considers the plastics package too good to throw away.” Wasting has been naturalized. Disposables have been naturalized.

Recycling is complicit in this. It’s not a coincidence that the largest supporter of recycling is industry. The founder of the recycling symbol is the Container Corporation of America. One of the biggest supporters of New York City’s recycling program is the American Chemistry Council, the chemical and plastics lobby. Recycling not only saturates markets in a certain way—it lets industry externalize costs. If a company uses reusable bottles, it has to pay for those bottles to return, but if it uses disposables, they get sent out into the world made with very cheap materials, and municipalities pick up the bill for running them to the landfill, or recycling station, when they are done. The money saved can translate into profit. This is what is meant by “externalization.”